When it comes to food, I am brutally honest. Perhaps this is why Richy asked myself and the hubby to be part of a feedback group for the new Winter menu at Richy’s Restaurant. I never say no to the offer of a good meal. So, when I had finished jumping up and down in delight, I put my glad rags on and made sure the camera was charged. Chef Richy very kindly covered the cost of my extensive meal in return for my input on the menu.

Always looking for new ways to reinvent Richy’s Restaurant, Head Chef and Owner, Richy Virahsawmy decided to put Chef Meeran centre stage for a solo. Meeran put the menu ideas together with some input from the team and then led the way in bringing the food from paper to plate. Judging by my tears of joy after every mouthful of food, I think the two Chefs were happy with how the food was received.

We started by sitting down with a G&T and going through the proposed menu. I did highlight a few things that I knew I would like and a few that I didn’t think I would fancy but feeling brave after my weekend in the Castle, Castletownshend, I vowed to try everything.

The first dish that arrived was goats cheese. It was wrapped up like a surprise in parma ham and was accompanied by the most delicious selection of beetroot elements. There was a froth on top of the cheese and jellied and roasted beetroot placed around the centrepiece. I am not a fan of goats cheese but the creaminess of the cheese juxtaposed with the saltiness of the ham and the sweet, earthy elements of the beetroot were utterly devine.

Would you believe, I have never tasted Calamari before! Don’t laugh –  I know! In truth, I’m a fussy eater and when most people describe calamari as rubbery, it doesn’t exactly make me want to run in to a restaurant and devour them. These looked delicious though and when I discovered that they are not in fact rubbery at all, I was a little bit delighted that I can now be part of the calamari cool gang! Richy tells me that the trick is to sous-vide the meat. This means that it is slow cooked in a pouch or glass jar submerged in water. This is slow cooking at its absolute best and results in succulent, tasty calamari rings.

Now this is where I came into my own. The tang of the cabbage was so perfect with the tuna. This dish was an utter delight to the senses. No more needs to be said! But – I could go on all day! There were so many elements to this dish that were just delightful. To top this dish off, there was a lightly honeyed dressing drizzled amongst sweet pea shoots – this brought an element of summer to the plate while the wind and rain wailed outside.

I was dubious. The dish looked simple, plain even! It actually looks like chicken maryland with bbq sauce. However, this was the intention of Chef Meeran all along. He wanted the dish to look so underwhelming that it wowed the taste buds and that is exactly what it does. I don’t know how, but it tastes like nothing I have ever tasted. This will be a perfect option for the kids when I do eventually bring them down with us for dinner. Oh, and the sauce was tamarind sauce and not BBQ.

Scallops are a popular dish in West Cork and what better to pair their silkiness with than the salty, crumbly texture of Clonakilty black pudding. The feedback I gave on this dish was that I would like more black pudding to balance the flavour.

The 80’s called and they want their brie back – but they can’t have it! I’m keeping it. I am not a huge cheese fan – but this was bloody gorgeous. The fig jam that came with it would have been devine on its own on bread. I’m planning a trip back for this dish on its own. It was baked with fresh rosemary on top and the flavour filtered through the entire dish. This one made my absolute favourites list.

There were some starters we didn’t sample, but I wasn’t complaining! I have more exciting tastes to try when I go back the next time. I will definitely be going for the Brie again to share (or maybe to have to myself…we will have to see!).

The Mains – Imagine, I STILL Had Space

I am going to add a disclaimer here. I have no recollection of what these main courses were called. What I do remember is that their descriptions were not designed to sell! Sometimes, when I read a menu, I am just confused and thrown off my mentions of minute elements of a dish that you never even end up tasting.  These dishes are described simply and then deliver 20 times more than you ever expect.

Do You Even Kale?

You either love or hate kale. But, until you have tasted this dish, you have no idea of the potential for deliciousness that kale holds. There is crispy kale (I don’t know what they have done to it, but it is bloody gorgeous) and the chicken rests on a bed of kale pesto. Every single mouthful of this was devine. I rarely order chicken when I am out, but there is something pretty special about this dish.

While I often love the vegetarian option, this would not have been my favourite dish of the evening. There was nothing wrong with it – the bok choi was beautifully done and the base of lentils was belly warming, but it didn’t make my tastebuds weep with delight as many of the other dishes had. My hubby, on the other hand, raved about this dish and has vowed to order it again.

Bizarrely enough, seabass is a fish I would rarely order when I’m out. I don’t know why because I rather like the taste. On this occasion, I have vowed to order it again. It was cooked beautifully. The white meat was fragrant and delicate and was not overpowered by the pickled samphire. The fennell on the plate was a beautiful addition and it seems as though it was made purely to accentuate the flavour of the fish. This dish was an absolute must!

I could talk for days about this dish – and that is before we ever get to the beef. Sadly, I was far too engrossed with what was on my plate to take photos. That is surely a sign! This meal consisted of beautifully cooked beef on a layer of curried parsnip pureé. While it doesn’t sound that interesting, it was an absolute taste explosion. There was some tandoori cauliflower with this dish which is like nothing I have tasted. I suggested that Richy just have the parsnip and the cauliflower on their own as a vegan dish and I would be very surprised if this hadn’t been added to the menu. The flavours on this plate were nothing short of spectacular and got a 5 start mark from me.

The wine must have been truly flowing at this point because I never took a photo of this dish either.  Again, this dish is presented simply but far exceeds what the eyes observe. The flavour of the sauce was awe inspiring and the fish cooked perfectly – translate that to “I usually hate monkfish and didn’t really want to try it, but I really loved this dish”. My feedback on this dish at the time was that the plate looked a little bare and I know that since then, some other elements have been added. The shining light on this dish was the tandoori broccoli – like seriously – who even thinks of doing that with broccoli? It was just out of this world and I ended up ordering more!

Chef Meeran landing in West Cork has added a spicy new vibe to the Mauritian influenced kitchen.  The simple approach to creating amazing food has landed Richy’s new menu firmly at the top of my good books. It is not often that I find myself surprised by food, but this tasting was a continuous stream of fireworks and surprise parties on a plate and on my tastebuds. With Chef Meeran taking centre stage and Richy conducting the orchestra, the new menu at Richy’s Restaurant is sure to receive a standing ovation by anyone who attends.

Price point is anywhere from €6 (soup) to €13 (scallops) for the starters and from €17.95 (vegan option – lentil cake) to €28.95 (scallops and prawns). Most of the mains are in the €20 oddbracket but the quality of food and the taste factor make this menu real value for money. A must visit venue for West Cork.

END NOTE – 1. I made Richy stand on a bucket so that he would be the same height as Meeran for the photo – these smiles are genuine and not just from the training the boys received in their days as male models!

2. I didn’t try the desserts. The one simple reason for this was that I was full to the tops of my ears. I tried every single dish I have written about here. Add in a G&T and a few glasses of wine and you can imagine rolling me and my belly out of the premises. I have since had the chocolate dessert. Decadence doesn’t even come close to describing it.

If you decide to visit, I hope you enjoy your meal. Please do come back and let me know what you order! If you enjoyed this review, don’t be afraid to share it to your facebook page or twitter 🙂 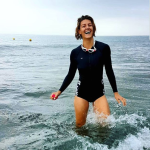